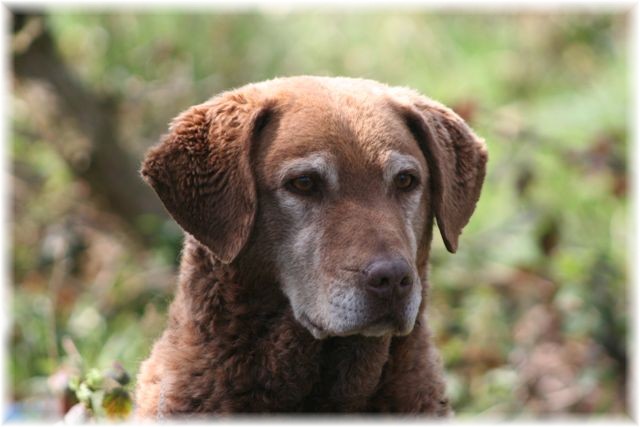 Chesapeakes are a generally healthy breed. The breed standard for Chesapeakes requires a dog that is structurally sound and built for a hard day’s work. It suffers no exaggerations in shape or breed characteristics. However, as with all pedigree dogs and many non-pedigree dogs too, inherited diseases do occur. The problems listed below are not common, but have been reported in the breed. Tests and examinations can be done to reduce the risk of these problems occurring. The CBRC recommends that new puppy buyers check that the relevant tests have been carried out on both parents of any litter they consider looking at.

The CBRC keeps a record of all Chesapeake health test results, which are printed in the Club’s newsletter annually. If you have a dog tested for any of the conditions listed below, please send copies of the results to Chris Mayhew, Bent Farm, Bent Lane, Hambledon, Hampshire PO7 4QP or email bobmayhewQhorses@aol.com. If you have any questions about the testing schemes, please contact the Breed Health Co-ordinator, Sue Worrall by emailing chesapeakeblue@btinternet.com.

The Kennel Club has several online resources, including information on recommended health screening and DNA tests. Mate Select gives owners, breeders and puppy buyers the opportunity to look up the health information that is available for any KC registered dog, using the Health Test Results Finder.

You can find information and advice on breeding and its impact on health in the Kennel Club’s booklet Breeding for Health Information Guide.

PRA (progressive retinal atrophy) is an inherited disorder that occurs in many breeds including Chesapeake Bay Retrievers. There are several forms of PRA, and it is prcd-PRA that can occasionally affect Chesapeakes. PRA causes cells in the retina at the back of the eye to degenerate and eventually leads to blindness. Early symptoms are failing eyesight at low light levels, hence the old term of ‘night blindness’.

Dogs that are affected with PRA will often not show symptoms until aged 8 or 9 years, which may be after they have been bred from. However, PRA can be avoided in future generations by genetically testing the dogs before breeding.

Responsible breeders will know the PRA status (clear, carrier or affected) of both parents of any litter they are planning. Dogs carrying the affected gene can still be bred from, but should only be bred to ‘clear’ dogs, to avoid producing affected offspring. Where both parents are clear, the offspring will all be clear.

If you are purchasing a puppy, check that both parents have had their eyes examined under the BVA/KC Eye Testing scheme within the past year. Breeders should have up-to-date certificates for both parents for you to view. 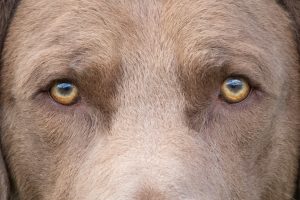 Degenerative myelopathy (DM) is a gradually progressive neurological disorder that affects Chesapeakes as well as many other breeds of dog. The first symptoms are usually a slight wobble in the rear legs, which progresses into a dragging of the rear feet. The hind legs become weaker until eventually the dog can no longer walk.

There is now a DNA-based test for one gene that has been associated with DM. The results of the test are described as either clear, carrier or at risk. Dogs are listed as ‘at risk’, rather than ‘affected’, as the test only identifies one of the genes responsible for DM. A dog identified as being at risk of developing the disease may well never have a problem with DM. At risk dogs can still be bred from, but the choice of mate should be carefully considered.

Testing is done with a simple swab sample you collect from your dog and post to the lab for processing. Results can be found on the Kennel Club’s website as well as being published annually in the Club’s yearbook.

Animal DNA Diagnostics is offering a 20% discount on its DM, PRA and EIC testing bundle to members of the Chesapeake Bay Retriever Club, making it £148.80 for all three of these tests. If anyone wants to take advantage of this discount offer, then please contact our Breed Health Co-ordinator Sue Worrall via email at chesapeakeblue@btinternet.com.

DM and PRA are important tests to carry out before every Chesapeake is bred from. EIC is not something that has been seen in the UK so far, but does occur in the States. The discount offered by Animal DNA Diagnostics means the EIC test is available for just a small additional cost.

Hip dysplasia (HD) involves some degree of deformation of a dog’s hip joints. The disease has both a genetic and an environmental component. Some dogs will carry genes that will predispose a dog to hip dysplasia. However, the severity of the disease will also depend on environmental factors, such as the amount of exercise a dog receives, and whether it is overweight. 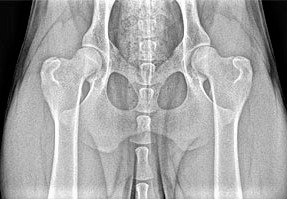 It is a complicated disease, affected by many factors, and the genes contributing to the condition have not been identified. Therefore the degree of hip malformation is assessed using x-rays. The x-rays of a dog’s hips are assessed by a panel of experts under the BVA/KC Scheme. The experts give the dog’s hips a score. A higher score indicates a greater degree of abnormality.

The CBRC keeps a list of all dogs that have been hip scored under the BVA/KC Hip Scoring Scheme. Most breeders aim to breed from dogs with an average hip score or lower. The average score for a Chesapeake at this time is a total score of 10.

Elbow dysplasia (ED) describes the abnormal development of the elbow. The term includes a number of specific abnormalities, which affect different sites in the joint. Like hip dysplasia, it is a complex disease, probably involving a number of different genes as well as being influenced by environmental factors.

The purpose of the BVA/KC Elbow Scheme is to reduce the incidence of the disease in dogs used for breeding. The degree of abnormality of the elbows is determined by x-rays of the elbow joints. Each elbow is graded on a scale of 0 to 3, by two specialists. The lower the grade, the better the anatomy of the elbow. In this scheme, if the dog has two different elbow grades, the higher of the two is used as the dog’s elbow grade.

Exercise-induced collapse (EIC) is a hereditary condition that causes an affected dog to collapse following intense exercise. Affected dogs are usually diagnosed before 2 years old. They appear normal during moderate exercise. However, after 5-20 minutes of strenuous activity, a dog’s hind legs may appear weak and wobbly. The dog may continue to run while dragging its hind legs. This may progress to complete collapse, with the dog remaining mentally alert. The severity can vary.  The dog will usually recover completely within 15-30 minutes.

EIC is a neuromuscular condition. It is hereditary, and an affected dog must inherit two copies of the abnormal gene, one from each parent. A dog that only inherits one copy of the abnormal gene will not show signs of the condition but will be a carrier, and may pass on the gene to its offspring.

We are not aware of any Chesapeakes in the UK having been diagnosed with EIC so far. EIC does occur in the States. Testing means that we may pick up on carriers before breeding.

The purpose of the Breed Health and Conservation Plans is to ensure that all health concerns are identified through evidence-based criteria, and that breeders are provided with useful information and resources to support them in making balanced breeding decisions that make health a priority. They are produced in collaboration with the individual breeds by working with Breed Health Co-ordinators and breed clubs. You can find out more about the plans on the Kennel Club website.
KC Breed Health Plan for
Chesapeake Bay Retrievers 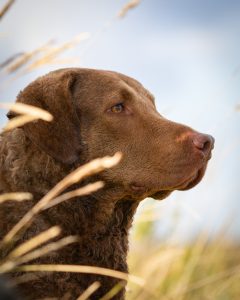